It was again the 19 year old Rashid Khan who bowled well in do or die match against Ireland that Afghanistan Qualify for ICC World Cup 2019 in style. After the downfall in early stage of World cup qualifier Afghanistan outplayed the opponent in last three matches they played. As from the next month IPL is going to start, again Rashid Khan looks as massive weapon for Sunrisers Hyderabad. 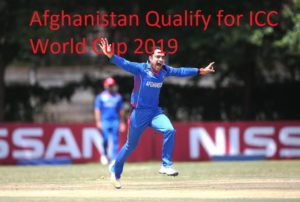 The super six matches of world cup qualifier were very intense and exciting for the teams. It was Westindies who who qualified first after win against Scotland. Now Afghanistan  is second team to qualify for the ICC world cup 2019 which will take place in England starting from 30 May to 15 July 2019. Cricket World Cup 2019 will feature top 10 cricket playing nation from the world.

In early stage of the tournament Afghanistan was playing without their regular captain Asghar Stanikzai and Rashid Khan was leading the team. The responsibility of captaincy was affecting the performance of Rashid Khan a bit, but after the return of their regular captain Stanikzai the performance of Rashid Khan was exceptional as he to one fiver and now he is going to take one more wicket and will become the fastest ODI bowler ever to take 100 wickets in the world.

It was Ireland who won the toss and elected to bat first but it was Afghanistan who took the advantage and restricted them for 209/7 in 50 overs.  Paul Stirling and Kevin O Brien were main scorer for Ireland as they scored 55 and 41 respectively. Rashid Khan was the top wicket taker as his tally read as 10-40-3. For Afghanistan it was their dashing opener Mohammad Shazad who smashed a fifty and chased the target of 207 in 49.1 overs. Mohammad Shahzad was chosen as  man of the match.

Man of the Match : Mohammad Shahzad

Now the final of World Cup qualifier 2018 will take place between Windies and Afghanistan at Harare on 25th March, Sunday.