It was just a matter of time that 19 year old Afghanistan leg spinner Rashid Khan becomes fastest bowler to take 100 ODI wickets in just his 44th one day cricket match which makes him fastest to 100 ODI wickets. Since his debut in one-day cricket, he has been sensational in one-day and t20 matches. In his last match he could’t make make it 100 as he was just one wicket away from the remarkable milestone of becoming the fastest 100 wickets taker in the world cricket. 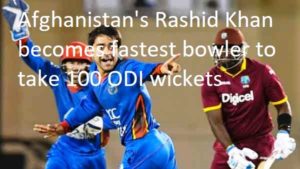 It was the wicket of West Indies’ Shai Hope who became the wicket number 100 for Rashid Khan. His tally of becoming the fastest bowler to take 100 ODI wickets in ODI is 8 match fewer than Australia’s  pace battery Mitchell Starc who achieved in 52 matches. Here is the top 10 fastest bowler who have taken 100 wickets in odi cricket. Take a look…

Rashid khan has cached eyes of t20 franchisers from all over the world since his debut in international cricket and last year’s success of ipl made him most favourite and valuable assets for every league t20 matches. He has been first choice leg spinner for SRH in IPL.