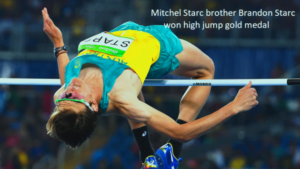 He made his best jump as with jump of 2.32 metres which was enough to grab the gold medal at CWG 2018. Mitche Starc was a happy man as he tweeted about his joy for his brother. See the tweet bellow.

He is eyeing more with future games as he said, “Hopefully I’ll keep going. [I’m only] 24. I think I’ve still got plenty of years left in me. But right now I’m just going to soak it all up and enjoy it.”

This winning gold become more special as It was Australia’s first high jump gold medal since 1994.