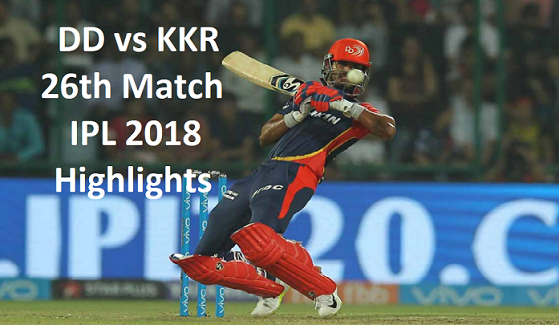 Kolkata Knight Riders won the toss and opted to bowl first at Feroz Shah Kotla stadium. Delhi Daredevils opened their inning without their ex captain Gautam Gambhir and they brought back power hitter Colin Munro along with Prithvi Shaw and duo provided solid start for DD. Colin Munro bowl out after making 33 runs from 18 balls by Shivam Mavi in 7th over, then Shreyas Iyer joined Prithvi Shaw and stayed there till the end after making quick fired 40 balls 93 runs which included 10 sixes and 3 fours; Prithvi Shaw also completed his half century and made 62 runs. Glenn Maxwell also contributed a handy 18 balls 27 runs and Delhi Daredevils posted a big total of 219 runs on board with loss of 4 wickets.

Kolkata Knight Riders started the chase with their opener Chris Lynn and Sunil Narine. Captain Shreyas Iyer every one by giving 2nd over to Glenn Maxwell and the trick worked well as Maxwell bold out Chris Lynn in that over. Sunil Narine was hitting well but got out after making quick 26 runs in 9 balls only and the gate was opened by DD bowler as KKR batsmen couldn’t build partnerships and half the batsmen were out within 10 overs in big chase. Shubman Gill and Andre Russell were there in the middle as they build the partnership but it was not enough and both got out after making 38 and 44 runs respectively. All delhi daredevils bowlers did their job well and Delhi Daredevils won the match by 55 runs.

Click here to know for ipl records and stats from today’s match and do visit for latest IPL updates at SportsTakis.