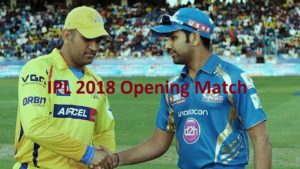 Must awaited opening match of CSK vs MI was as exciting as they were returning in IPL 2018 from 2 years ban and CSK did fare to their fan and supporters by winning the opening match in style.

As you read here the IPL 2018 Opening Match has started with so much twist and turns as CSK held the nerve and won the ipl 2018 opening match at Wankhede. Initially it was CSK who won the toss and they elected to bowl first, Mumbai batted first, but the start was not as good as we were expecting as their star opener Evin Lewis out for duck and Rohit Sharma also got out early, again it was Pandya brothers who set the tone for Mumbai Indians and partnership between both Krunal and Hardik Pandya took the score board to a challenging score of 165-4 in 20 overs.

As CSK came down to chase with Ambati Rayudu as new opener alongside Shane Watson and they did good partnership before going out by Hardik Pandya and debutante Mayank Markande took 3 wickets but it was Dwayne Bravo brave performance and Kedar Jadhav heroics as CSK won ipl 2018 opening match.

With last 4 overs remaining and RR of above 13 Dwayne Bravo was the sole warier by hitting 7 sixes before went out last ball of 19th over and CSK were 9 wickets down and they needed 7 runs to win in last over with only 1 wicket in hand.

It was Kedar Jadhav who hits a six and four on 4th and 5th ball before facing 3 dot balls and won the match for his team in IPL 2018 Opening Match.

IPL 2018 is going to be more interesting and rivalry from their previous editions. With this win CSK started the 2018 IPL campaign as top ranked team in ipl 2018 points table and Mumbai Indians will have to start from bottom of the table.

Click here to know for records and stats from today’s match and do visit again for latest IPL updates at SportsTakis.