What we say it explosive or merciless hitting, whatever word you use to describe KXIP openers batting duo KL Rahul and Chris Gayle is less. This is IPL boss and The Universe Boss Chris Gayle is always in 5th gear from the very first ball of the match. Lokesh Rahul showing his explosive hitting skills as he smashed 60 of 27 balls only which helped Kings XI Punjab to won the match by 9 wickets (DLS method – due to rain). Lets have a look at highlights of KKR vs KXIP 18th Match IPL 2018 here in some words. 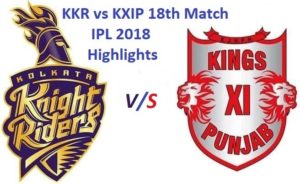 After the win Player of the match KL Rahul said, “I don’t want to stop whatever I am doing. I am in a good space and want to win games. The approach is going to be aggressive and to take the bowlers down within my limitations with whatever I am gifted with. It’s working for me.”

KKR were playing ipl match against KXIP in Kolkata tagged as favourite team to win but they lost by 9 wickets at Eden Gardens. Earlier KXIP captain won the toss and opted to bowl first. KKR opening duo Chris Lynn scored a quick fire 74 runs of 41 balls as his opening partner Sunil Narine got out in 2nd over of inning by Mujeeb Ur Rahman. Robin Uthappa and captain Dinesh Karthik also scored 34 and 43 runs respectively before getting out. KKR set the target of 192 runs for KXIP.

Chris Gayle The Universe Boss started his inning from where he left in last match with his new hitting dynamite opening partner Lokesh Rahul. KL Rahul was in different mood today as he smashed his half century in 24 balls by hitting 7 fours and two sixes and got out by making 62 runs, the only wicket kxip lost.

The match was stopped due to rain after 8.2 overs with score reading 96-0, but KXIP at that point were 31 runs ahead of the DLS par score (65/0). When match started again with the revised target (DLS method) of 125 runs in 13 overs, they lost 1 wicket of KL Rahul from there and Kings XI Punjab won by 9 wickets (DLS method).

Click here to know for ipl records and stats from today’s match and do visit for latest IPL updates at SportsTakis.