Royal Challengers Bangalore won their opening match at Bangalore against Kings XI Punjab. Earlier RCB bowler did fantastic job to restrict and all-out KXIP batsmen as Umesh Yadav took 3 wickets in a over to set back the KXIP batting line-up and it was KL Rahul who scored 47 crucial runs for KXIP. Take a quick look at RCB vs KXIP 8th Match IPL 2018 Highlights. 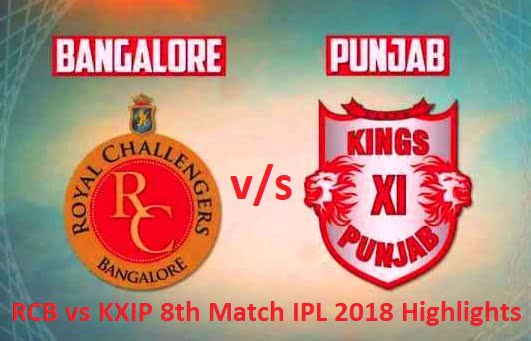 Royal Challengers Bangalore won the toss and opted to bowl in the opening match at Bangalore against Kings XI Punjab. KXIP inning was going well until Umesh Yadav did something special in the 4th over of inning. He took the wickets of Mayank Agarwal, Aron Finch and Yuvraj Singh in that over and King XI Punjab were in deep trouble but it was Lokesh Rahul who kept scoring at other end. Ravichandran Ashwin (33) played captain knock at the end but they couldn’t survive for 20 overs and all-out for 155-10 and set the target of 156 runs for RCB batting unit.

For RCB 155 was not enough score, keeping in mind their batting line up but R Ashwin KXIP captain had different idea as he started with spinners from both the end. It was Axar Patel who got the wicket of Brendon McCullum(0) for a duck. But RCB duo Quinton de Kock(47) and Kohli(21) kept playing well against spinners but a delivery from Mujeeb Ur Rahman did magic as RCB captain was bold out and KXIP were in game. It was AB de Villiers(57) who build RCB inning to ensure the RCB win.

Click here to know for records and stats from today’s match and do visit for latest IPL updates at SportsTakis.