Kings XI Punjab registered their first win in Jaipur against Rajasthan Royals in IPL history. The 4th match of IPL 12 belongs to Chris Gayle and Jos Buttler inning but the controversial run out of Jos Buttler by Ravi Ashwin was the focus point after the match. Let’s read out the complete details of RR vs KXIP 4th match IPL 2019 here. 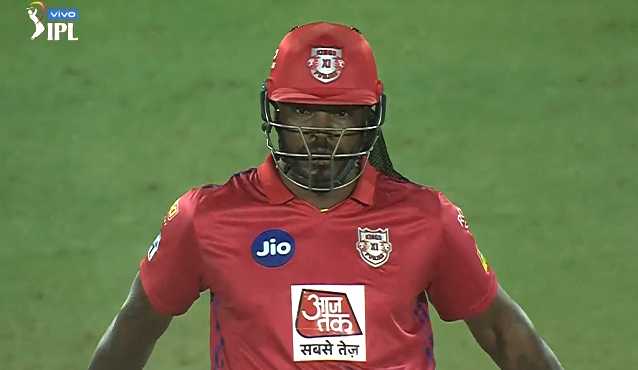 Earlier Rajasthan Royals won the toss and opted to bowl first against Kings XI Punjab. Chris Gayle smashed 79 runs in 47 balls and awarded as Man of The Match.

Kings XI Punjab opening duo Chris Gayle and Lokesh Rahul started the inning but KL Rahul got out in first over by making 4 runs only. New batsman Mayank Agarwal comes to the crease and build 50 plus partnership with Chris Gayle and got out by making 22 runs. Initially Chris Gayle was not in good touch as he made 27 runs of 25 balls but once he settled at the crease the next 50 runs he scored in only 17 balls and before getting out made 79 runs in 47 balls. Sarfaraz Khan also contributed with 46 runs in 29 balls to ensure the KXIP inning with a competitive total.

Rajasthan Royals openers were in no mood to settle the KXIP bowlers in the batting powerplay and their opener captain Ajinkya Rahane and Jos Buttler build 78 runs opening partnership. Rahane made 27 runs in 20 balls before getting out. New batsman Sanju Samson and Jos Buttler were scoring very easily and at one stage they were looking very comfortable to chase down the target. Jos Buttler was making chase easy as he was on 69 of 42 balls and was scoring run easily by making his fifty but Ravi Ashwin run out him and the scenario changed from there and other batsmen couldn’t stay at crease till the end which hurt Rajasthan Royals a 14 runs defeat against KXIP first time in Jaipur.