IPL Alert : Believe it or not Wriddhiman Saha hits 20 ball Century in club cricket on March 24, while representing Cricket Association of Bengal (CAB) for his club Mohun Bagan in a t20 match. It’s going to wait and watch for his fans in upcoming edition of IPL matches, as he grab the attention of all cricket lovers before IPL games. 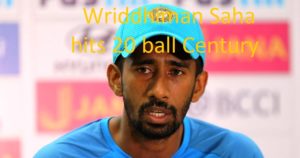 He he hits 14 sixes and 4 fours scoring 100 runs as boundary in his 102 of 20 balls he faced. It’s a world record century by the way and he said as he don’t has any idea regarding that. “I am not sure whether this is a record. With the IPL coming up, I just tried to play different shots and it worked out beautifully today,” he said.

About his feat of scoring 6 sixes in an over, after the match he said, “After five sixes in five balls, I tried to hit the last ball for a six as well. I am feeling really good that I could achieve it”. And whether he should be in Indian team for one day or t20 matches, Saha said, “It’s up to the selectors. My job is to keep performing whenever I get a chance.”

He hits 6 sixes in an over during his record breaking 20 ball century. It’s going to be interesting to see how management of SRH uses him in the upcoming ipl matches as they have garbed the Indian test wicket keeper batsman Saha for spending 5 crore this year in IPL 11. He already has scored a century in the 2014 IPL final match against KKR making him the first and only player to do so in a IPL final match.

Before Wriddhiman Saha hits 20 ball Century, Mohun Bagan had to chase 152 runs against Bengal Nagpur Railways (BNR) in 20 overs, but it was saha who dusted them by chasing the target in 7 overs only, while his partner captain Subhomoy Das scored 43 off 22 balls and they own the match by 10 wickets.